A Little bit of History

"You can hardly see this little church from the road, just its perimeter wall. The joy ofthe view from the little garden at the entrance of St Mary's, Battersea and is one of my favourite places in London."
Gibson Square, the London Cabbie Blogger 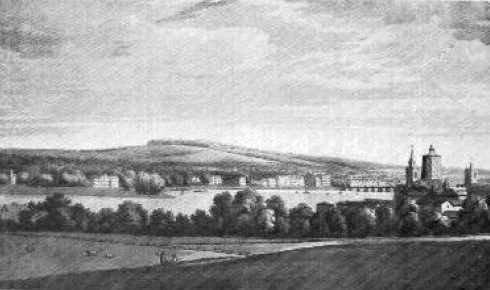 Battersea Parish Church and the Old Mill as seen from East Wandsworth. The new townhouses and fields of Chelsea can be seen in the distance. At the far right is the tower of Chelsea Old Church. Engraving c. 1793

Battersea first comes to the attention of written history in 693 AD, when a charter describing the landmarks of Battersea (or “Badrices Ege” as it was then) was drawn up by King Aethelred of Mercia. There was probably an Anglo-Saxon church on site by 800 AD but, because its foundations were destroyed when the current church was built, we have no idea what it looked like.  The depiction of a typical Anglo-Saxon Church below gives some idea of its probable appearance, a small and simple two-roomed building, much like the church which can still be seen in the village of Escomb in Country Durham. In any event, by the time of the Domesday Book in 1086 AD, the village of Battersea was certainly well established. 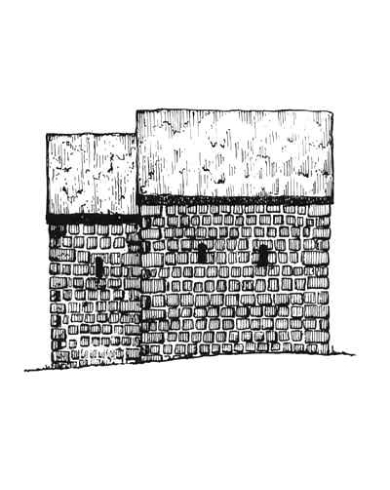 The entry for Battersea (by then “Patricesy”) records that the village itself contained in “45 villagers and 16 smallholders with 14 ploughs and eight slaves, seven mills and woodland enough to pasture fifty pigs”. The village priest, Gilbert, owned 3 hides of land (90-120 acres).  It also states that King William gave the manor of Battersea to Westminster Abbey in exchange for the land on which Windsor Castle was later built. The church may well then have been called St Peter’s, after the dedication of Westminster Abbey itself. The Abbey used the income that they collected from Battersea to pay the costs of its infirmary (hospital for sick monks), and in return the Abbey was responsible for the upkeep and worship life of the parish. In 1297, for example, the Abbey paid five shillings and four pence to build a jetty next to the Church. Records also suggest that all the monks of the Abbey came to Battersea once a year on an ‘annual outing’.
Under the Abbey’s ownership perpetual vicars were first appointed to Battersea. Prior to that, the parish would most probably have been served by a rota of monks travelling upriver from the Abbey. The first vicar of Battersea whose name is known to us is Robert, who was instituted in 1263. Since then the succession is unbroken, and the current vicar is the 61st person to hold the office. 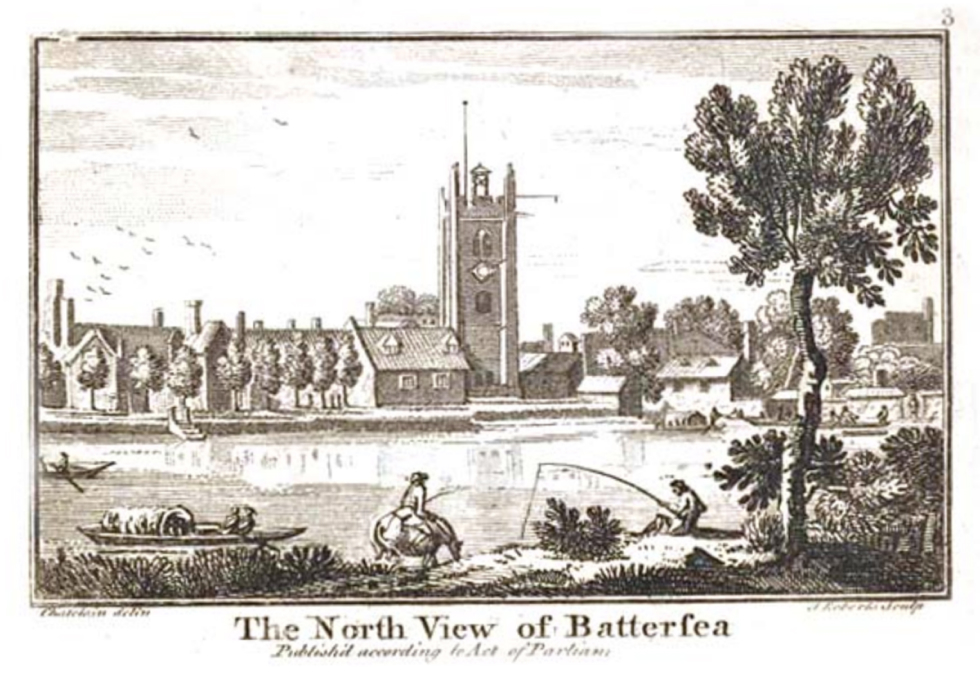 In subsequent centuries the church was enlarged and modified substantially, so that it eventually bore little resemblance to its Saxon predecessor. The present East window was put into the east wall of the old church in 1379-80 by Henry de Yeverly, the King’s mason. The nave was extended and a chancel added. A side chapel was built in the South aisle in 1489 which was dedicated to Nicholas, the patron saint of sailors, a reminder that the Thames was then the only highway for transport, and must have dominated the economic life of the village. A new steeple, replacing an earlier medieval one, was built in 1639. It cost the princely sum of £469, and the bricks for the tower were made at the new factory in Latchmere, near the current Latchmere Road. A picture of the old church as it looked in 1738, after the rebuilding of the nave, and the addition of extra chapels and a new steeple, appears alongside.
Henry VIII’s Dissolution of the Monasteries in 1540 severed the connection between Battersea and Westminster Abbey, and the patronage reverted to the crown. It passed through several aristocratic hands, until 1625 when Sir Oliver St John became the lord of the manor, the first of many St Johns to do so. They remained the patrons of the parish and lords of the manor until 1763 when the rights were bought by Earl Spencer. Charles, Earl Spencer, the brother the late Diana, Princess of Wales, remains its patron today.

The fact that parishes keep registers and records at all is due to royal command of Henry VIII, given through his vicar General Thomas Cromwell in 1538, and St Mary’s is fortunate in having an almost complete series of records. You can read some of these on the Brief Book Page. From these registers through the sixteenth and seventh centuries, Battersea became an increasingly fashionable area. It was considered a desirable country retreat from the turmoil of London, and after the building of the first Battersea Bridge in 1766, many rich City merchants established their country houses here. The population of Battersea was expanding and out-growing the existing church. So, when in 1771 the vestry was called upon to consider “the ruinous condition of the church”, they agreed unanimously to pull it down and build a new church “for not less than £4,000″. 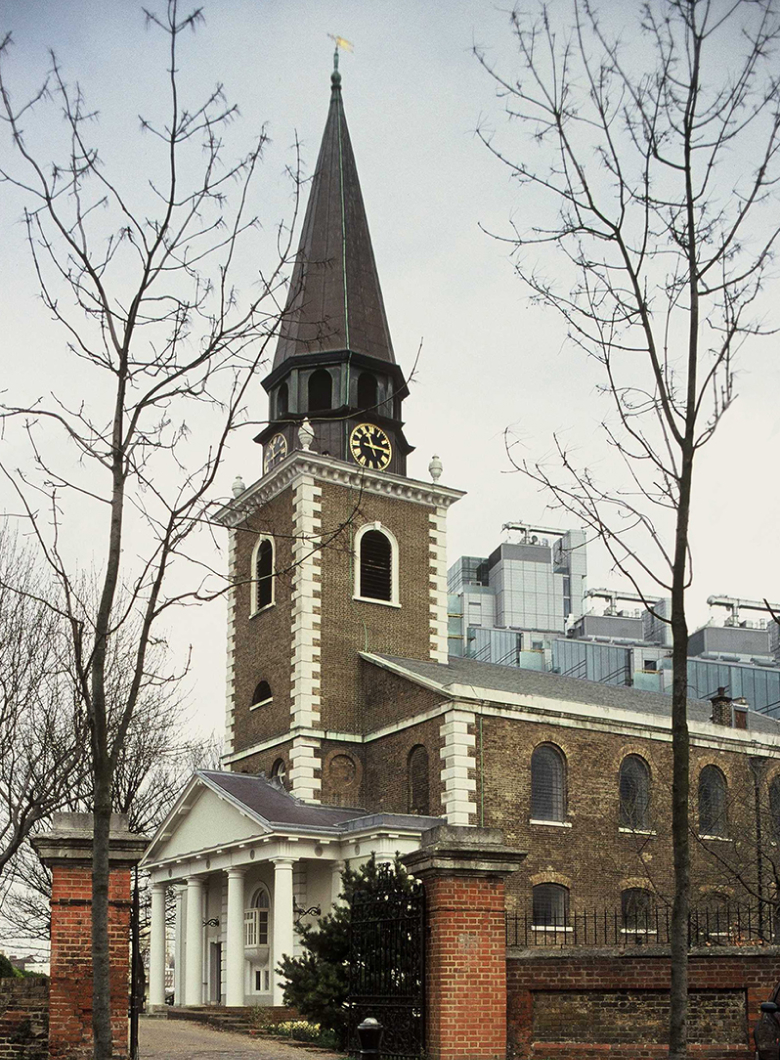 Plans for the building of a suitably fashionable and larger new church were agreed in the Raven, a pub close to the church. A local architect, Joseph Dixon was chosen as the designer. The first stone of the current church was laid in 1775. While the walls of the church went up, a crypt was dug underneath, sadly obliterating all traces of the first church. The East window of the old church, however, and some of the monuments were incorporated into the new building. Although the bells were recast to go into the new church, the metal of which they are made is essentially the same metal as those bells first mentioned in the parish records in 1552, and so provide another link between the present church and its pre-Reformation days. After two years of building, the new church (seen on the right) was opened with a service of thanksgiving on 16 November 1777.  Despite some minor alterations, notably the moving of the organ and the pulpit from their original positions, and the replacement of the original box pews with more modern ones, it remains largely as it was then. The comments of Sir A. Blomfield, delivered on the occasion of the church’s centenary in 1876 are still apt:

“St Mary’s has at least in two respects an advantage over many churches. It is well and solidly built, without show produced by false economy in essentials, and its architecture, tough not in accordance with modern ideas, is characteristic of the period at which it was built. Any great change in the fabric therefore would be questionable as a matter of taste as well as extremely costly to carry to any satisfactory issue.”

This brief history is fittingly concluded by noticing that when the architect Joseph Dixon died in 1787, the vestry decided that he should be buried in the crypt of his church, “without fee”.

In recognition of its beauty and architectural significance, Historic England listed St Mary’s as a Grade I building in 1954.  It is the only Grade I listed church in the Borough of Wandsworth.

Mr. Bob Speel has written about all the monuments of this Church. Please see his personal website.

Famous People associated with "¨the Church 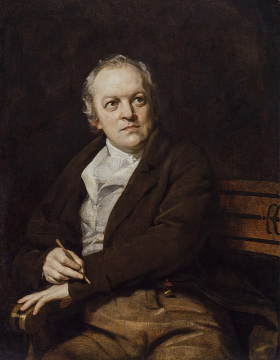 William Blake, the artist, writer and engraver – and the author of the poem we now sing as Jerusalem, was married at St Mary's in 1782 to Catherine Boucher, the daughter of a local market-gardener. 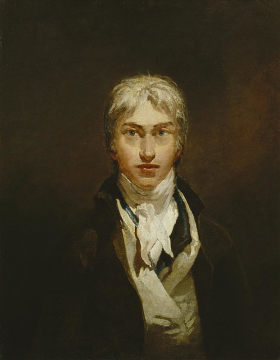 J. M. W. Turner, the artist, was a regular painter from the grounds of the church. His drawing Battersea Church and Bridge, with Chelsea Bridge Beyond of c.1797 gives a clear view of the present church shortly after its opening.

Each of these illustrious figures are commemorated in a series of important stained glass windows by John Hayward of Edenbridge.

A guidebook, gifts and other items related to the history of St Mary’s are available for purchase in the church.

A Virtual Tour of St Mary's